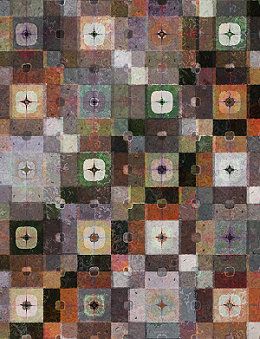 The Ultra Fractal Showcase gallery exhibits fractal art created with Ultra Fractal. Each time, it focuses on a single fractal artist, showing a small selection of his or her recent work, together with a small biography. Each image is accompanied by a short text that tells something about how it was created and what techniques were used. New artists are featured on a regular basis.

Many thanks to the program developer, Frederik Slijkerman, for including my work in the Showcase gallery.

Below are the eight pieces I selected to be showcased. 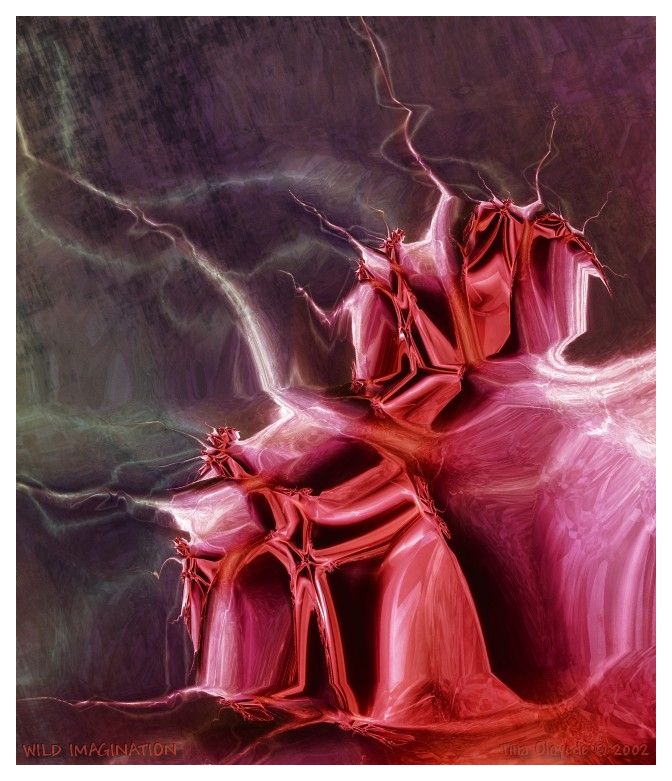 This early piece is from 2002 and is one of my personal favourites. I find there is something quite ethereal about the stormy background and surreal rocky structures in the foreground.

It has fifteen layers and uses a mixture of different colouring algorithms, some of which incorporate some of the exciting new textures being developed at the time, with a variation of the Julia formula, created using Ultra Fractal version 2.04. 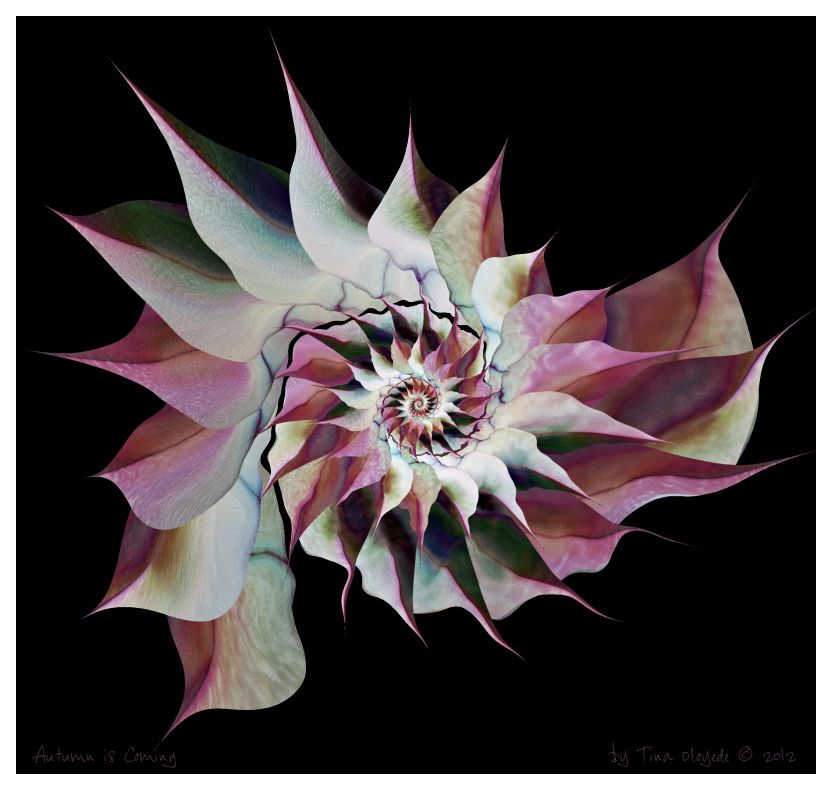 Going back a few years I made a large series of fractals using one particular Julia formula which produces a single "big" spiral. Autumn is Coming, created in 2012, is a derivative of a much earlier work from this series, 'Magical Pillows'. The leaf-like structures, which were quite unintentional, and the texturing arose through exploring the many parameter variables in ‘Thingamajigs II’, Toby Marshall's adaptation of Dennis Magar original colouring algorithm.

All too often I find the texturing in a fractal can almost disappear through the rendering process, but in this particular image it came out much better than I expected it to, giving the segments of the spiral an almost tangible quality. The distortion of the spiral shape was produced using a technique I learned from Janet Parke many years ago on the UF mailing list, using 'fBm Glass 1' mapping, sandwiched between two applications of ‘General Inversion’. The fractal has 13 layers, and was created using Ultra Fractal v5.04. 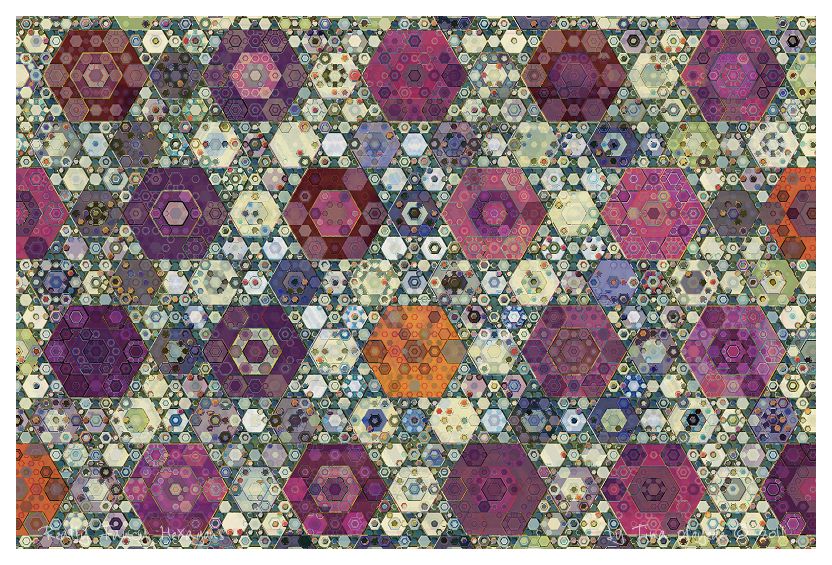 I remember as a child buying books of paper patterns from WHSmith to colour in using coloured pencils and cheap felt pens, and getting very frustrated that mine always ended up looking a bit of a mess with half the felt pens running out before it was completed!

One of the patterns was made up of varying sizes of hexagons, so I suppose in a way that is my digital answer to those colouring books! It uses a variation of Samuel Monnier's ‘SFBM II’ colouring algorithm, with a ‘Pixel’ formula, and has ten layers. With this type of image, most of the variation is produced using smooth gradients made in ‘Apophysis’, which allow an infinitely variable colour combination for the finished piece. 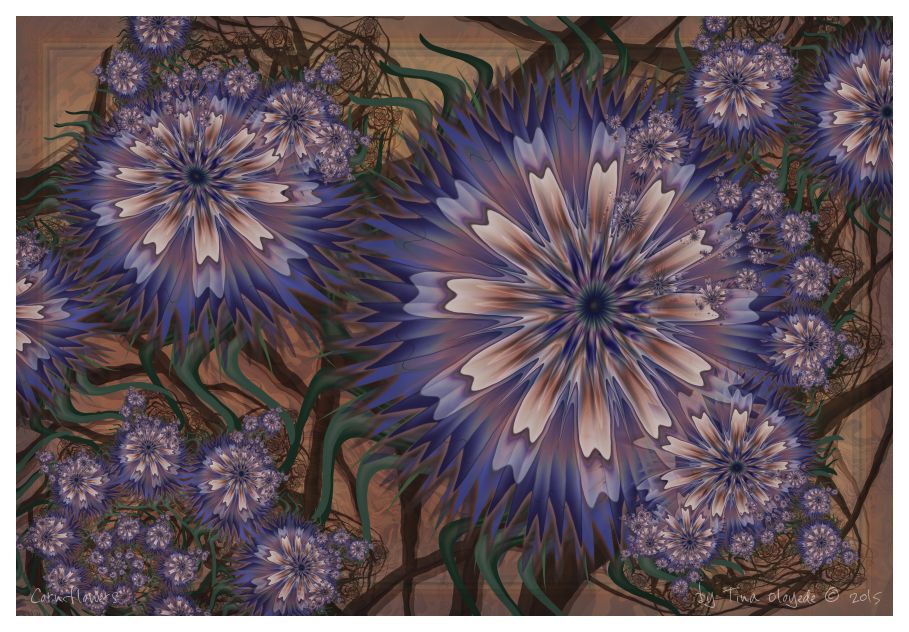 For many years I tried to avoid creating fractal art that attempted to look like flowers, instead tending to go for more abstract fractal spirals and shapes, and have only recently discovered the infinite possibilities of the plug-in feature in Ultra Fractal 5 and started using the ‘Flowers’ shapes plug-in to create much more realistic looking flowers. While ‘Cornflowers’ is still very stylised and has obvious Julia fractal structures, it is quite satisfying to be able to create a piece of fractal art that people who not familiar with fractals can immediately identify with. This image makes heavy use of the group feature to organise the layers that comprise the different elements – the flowers, leaves, stems, background and framing. It also relies heavily on masking techniques to define each element. Cornflowers has thirty seven layers, divided between six groups. 2015. 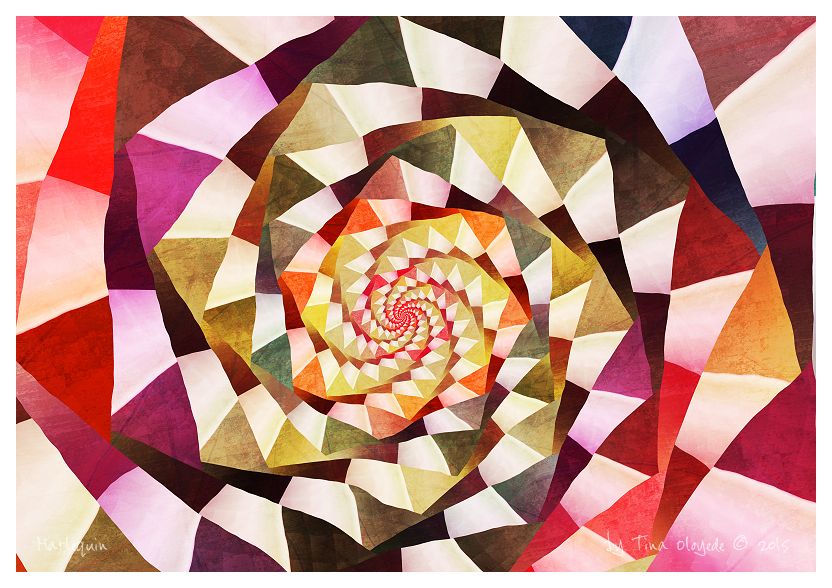 A simple spiral fractal which uses ‘mandala epsilon julia’ formula by Toby Marshall with ‘T Pure Color-by’ outside colouring, written by Andreas Lober, as well as Mark Townsend’s ‘Turbulence’ mapping. The focus in this image is on the use of bold colours and a slightly glassy, painterly texture, rather than the more intricate Julia spiral forms, in an attempt to give it the feel of a piece of abstract art rather than something derived from pure mathematics! Created in Ultra Fractal 5.04, this work has ten layers. 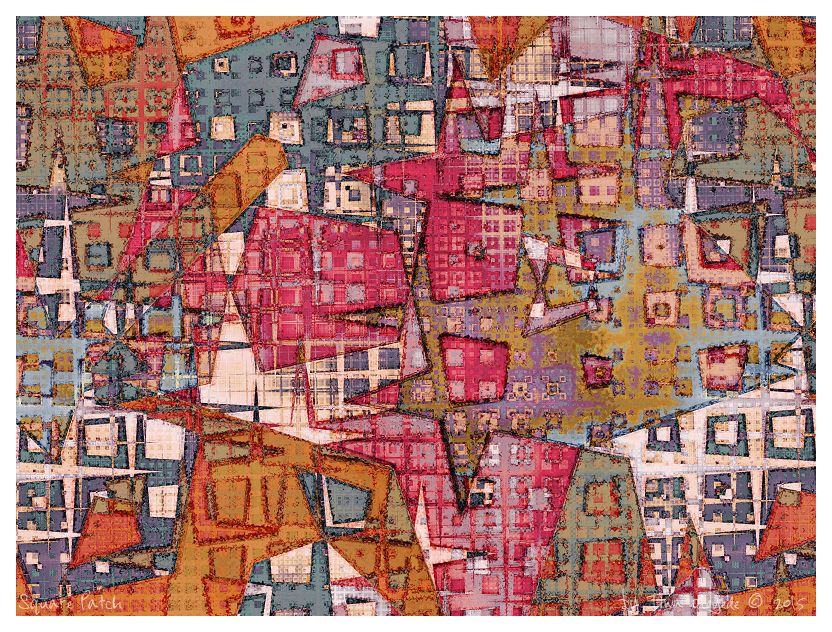 This uses one of my favourite colouring algorithms written by Samuel Monnier, with a pixel formula. The finished piece is reminiscent of a rather chaotic patchwork, using bright colours and bold shapes. This piece has 17 layers and was created in Ultra Fractal 5.04 in 2015 and makes heavy use of smooth gradients. 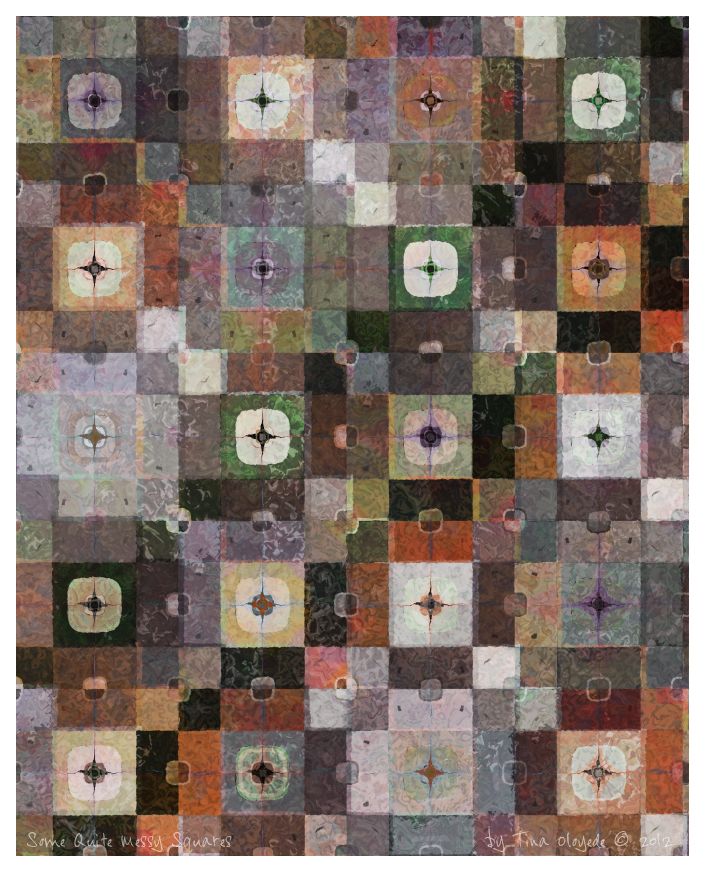 Some Quite Messy Squares

One of the things I really enjoy when creating a new fractal is forcing as much colour and texture into something that starts out as a quite basic geometric pattern, this is a good example of that. All the layers use the same colouring algorithm, written by Andreas Lober, combined with a simple ‘Pixel’ formula, but with slight variations in the shapes within the basic pattern in each layer, some additional textures and differing gradients, blended together in such a way as to give it a painterly quality.

I find the way the pattern almost appears to repeat itself, both in structure and colour, but actually doesn't quite do so, quite fascinating. 'Some Quite Messy Squares' was created in 2012 using Ultra Fractal 5.04, and has about twenty layers.

I worked a bit harder in this piece to achieve some detailed and more interesting textures and colouring within the petal forms themselves, and also the background, which uses several layers of ‘SFBM II’ and ‘Gaussian Integer’ with a ‘Pixel’ formula in an attempt to give it the appearance of an old mossy brick wall.